After a too-long hiatus intended to prepare me for Gary Con culminating in my NOT going, we resumed our adventures in Greyhawk, playing WotC’s Tomb of Annihilation.

After spending a night in Camp Vengeance, our heroes embarked on a short trip (relatively) to Mbala, where Nanny Pu’pu was reported to live. They suspected she was behind the increase in undead roaming the jungles, and to aid in that investigation, the commander of Camp Vengeance sent two of his soldiers with them.

The jungle’s oppressive heat beat down on them, and with not even a cool breeze to provide scant relief, the journey proved exhausting. Mid-day, they came across a hut along the trail. Poking around, they determined it was not abandoned per se, but merely unoccupied at the moment. They found evidence that a druid lived in the hut and leafed through her journal. She spoke of a friendship with an aarakocra who gifted her with a feather, and that she left to rescue friends from yuan-ti, but nothing leaving a clue to her whereabouts or that of the snake-people she sought.

They left the hut behind and continued for the rest of the day, making camp near a river they would have to cross in the morning. Shortly after dark, they heard noises from the jungle. A baboon approached the camp, then another. Then another and another and another until they were surrounded by dozens of the primates. A rock flew and the baboons attacked!

During the fight, a towering four-armed ape emerged and joined the fray. Though its attacks were brutal, Nali began to wear the gorillon down. Herrick noticed the beast wore and earring, and in a spectacular feat of agility, he climbed up its back and yanked it from its’ ear in the hopes that it would sever its control over the baboons.

That didn’t work, but within a few more rounds, it fell and the rest of the baboons fled into the jungle. Upon examination, they saw the token resembled that described in the druid’s journal, yet they still had no clue as to her whereabouts. 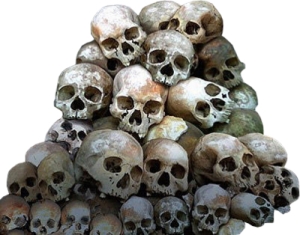 The next morning, the continued to Mbala, reaching the plateau around mid-day, then spent the rest of the day following the winding trail to the top. When they reached the summit, they were greeted with a wooden gate, surrounded by piles of human skulls….

I spoke of this on Twitter and Facebook, but this is the first edition in which I’ve found it more work to run pre-published material than to just make it up on my own. The difficult lies in the lack of guidance in the adventure books themselves. It would be helpful if Wizards of the Coast would include an outline of the plot points character should hit, or an adventure flowchart of some sort. Blogs and Third Party Publishers (3PP) have stepped in to fill gaps, but still, I shouldn’t have to pay a third party for something that the adventure ought to include.

I’m sure I’m not alone in the expectation that if I buy a $50 adventure book (or however much you spend on it), I should be able to spend less time prepping a session, but it seems like they expect me to study a 256-page tome thoroughly before even starting the first session. I think it would be more reasonable to have a section at the beginning outlining (i.e. NOT pages of dense paragraphs will superfluous information) how the adventure is intended to go, followed by information on getting started on session one. Time is at a premium for many GMs and if they think buying an official hardcover adventure is going to save them time (as I have foolishly done on more than one occasion), they’re sorely mistaken.

It’s one thing to say “Read through this adventure before running” when you’re selling a 16, 24, or 32 page adventure. But, when it’s 256 pages, that’s like insisting someone read the novel before going to see the movie; you’re going to lose a lot of people. Still, I’m going to keep at it once I get moved. Maybe I’ll switch tactics and use the book as more of a guide rather than even pretending it’s an adventure module I can run straight out of, because clearly, most of these hardcovers WotC are producing are unsuited for that purpose, despite what they claim.*

*This is all my opinion. If you disagree, great, but you’re not going to change my experience by telling me I’m wrong.

Since I mentioned prepping for Gary Con X in my last blog post, I thought I should at least do my customary post-con write-up.

A water main broke under our driveway and we discovered the leak two days before we were due to depart. 3 days without water and nearly $4,000 later, it was fixed. As a result, we made the decision to cancel our trip to Gary Con. Since we’re currently building a new house, this couldn’t have come at a worse time.

Instead, I worked from home for three days while workers came and went. I also got a lot of packing done for our upcoming move. Significant progress has been made on that front which wouldn’t have been done until after I returned from Gary Con, so I guess that’s good.

This Friday, we’ll return to our D&D game for session 4 of Tomb of Annihilation. After session 5, I may have to take another hiatus to finish packing and actually move. If that is the case, games will resume around Memorial Day from my new home and new game room.

Doctor StrangeRoll on the Web